The Aranea+ is one of the largest climbing centres in Switzerland and the southern German area. The numerous easy routes are ideal for beginners, families and school classes.  There is also a large variety of attractive routes for the experienced climber – in every grade of difficulty with some extremely overhanging walls. The air-conditioned bouldering room has many varied features with boulder problems from easy to extremly difficult. Visitors without climbing experience require an introduction or a Basic Course from our range of classes. To get an introduction it is possible to come along spontaneously without any experience to climb and play badminton –Climbing Challenge

Climbing World – Climbing Challenge: A special feature of the Aranea+ is our new and attractive climbing world with many special climbing routes. For example, you can climb the tower on the Turning Discs or “Face to Face” with your colleagues on the transparent wall.

The routes in the climbing world are equipped with sensors. The badge on your wrist registers your climbed routes. This is how you go point hunting in the vertical. You can view your current score on the screen in the gym. 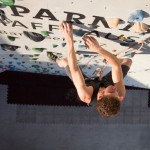 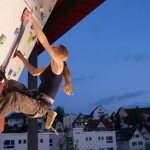 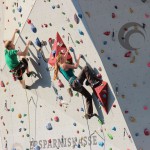 Top Rope climbing is the term used for a type of safety technique. A rope is already attached and redirected through an anchor at the top of the wall. The climber ties himself into the rope with a figure of eight knot. The climbing partner secures the climber at the other end and pulls in the slack rope, belaying the climber up the wall as he ascends. For this purpose he can use various belay knots/belay devices: Itialian hitch, Grigri, Tube, Reverso, Smart etc. This technique is particularly suitable as an introduction into the climbing sport, as it is less demanding than lead climbing.

TopStop – Rope Brake System. Different to the Top Rope System, the rope runs across several pulleys within the TopStop. As a result the load which the belayer has to bear when lowering the climber is reduced to approximately one tenth of the climber’s body weight. This requires less strengh from the belayer, as he can secure the climber by merely holding the rope with his hands and doesn’t need to learn how to use a belay device. The climber attaches his harness to the rope with two carabiners and does not need to know the safety knot to tie into a rope. Automatic Belay Machine. The Toppas can be used for climbing without a belay partner. The operation is relatively simple. The climber attaches the Toppas machine to his harness with two Karabiners. In the line of fall he can climb up and the wire cable is automatically drawn in and remains taut. When the climber lets go or falls, the Toppas cable slowly lowers him back down automatically.